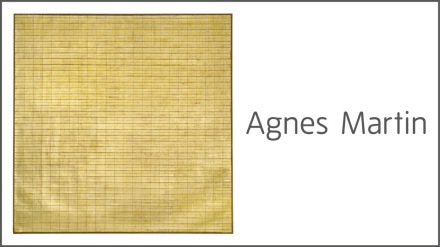 Agnes Martin was an American painter who was born in Macklin, Saskatchewan, Canada, in 1912, but became a US citizen in 1940.

In a career spanning five decades, Martin became known for her square canvasses, meticulously rendered grids and repeat stripes, though this exhibition will also present her lesser-known early works, experiments with mixed media, and works on paper. Martin thought of her works as studies in the pursuit of perfection.

When I think of art I think of beauty. Beauty is the mystery of life. It is not just in the eye. It is in the mind. It is our positive response to life.
Agnes Martin