(1)  Our Neighbourhood Plan – next steps to adoption

We have now received a proposal from Liz Wrigley, supported by Honore van Rijswijk (both of who were at recent meetings) to help develop and finalise our plan.  This follows the Council feedback on our first draft which, in the case of some of our policies, requires a significant amount of time input to produce supporting ‘evidence’.  How far this is reasonable and how far it is not can only be established when some of the work is done.  In order to proceed Liz’s proposal needs to be considered by the meeting.  Liz is engaged in neighbourhood planning on a professional basis and if we are to proceed with her proposal we will need to consider how her fees are to be funded.

BVAG was born out of necessity in 2010 when Southwark Council was in the process of slipping past people in our area a high-rise enabling policy.  Freedom of information inquiries revealed that it had been hatched at Friday night meetings with planners ‘convened’ (in the Council’s own word) by Shard developer, Irvine Sellar.  Coincidentally, it aimed to facilitate the three 60-floor towers he was proposing at the time for Bermondsey St (opposite Globe House, at the Corner with Snowfields).  The facilitating plan was to be sneaked in to a ‘Supplementary Planning Document’ supposedly in ‘consultation’ but which virtually nobody knew about.  The map below shows how a new high-rise zone was proposed along St Thomas St and the corner of Bermondsey St and Snowsfields. 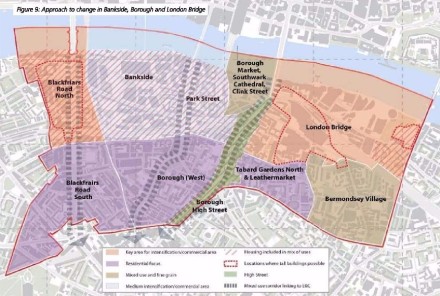 This planning-policy-on-the-sly incensed local residents and businesses and a few individuals mobilised to raise awareness of what was going on.  A rendering was produced to show what 60 floors at the end of Bermondsey St would look like (below). This was done using Centre Point as a model as Sellar was keeping the details of his proposal a matter for himself and the Council alone.  When the ‘consultation’ was about to close with responses from only 12 people the raised local awareness and the audacity of the proposal triggered hundreds more.  The Council responded with a characteristic rearguard denial, saying the new responses were all going in the bin as they were out of time!

This plan was eventually abandoned at an angry public meeting at which planners had their backs to the wall.  But now the Council are back for a second bite of the cherry with their long-expected high-rise revival for St Thomas St.  This dormant, but certainly not deceased, ambition is what led them to resist, and then refuse outright, our proposed neighbourhood planning area some time ago.  The ‘Planning Notice’ below that has appeared in Bermondsey St in the last couple of weeks is another classic of disingenuousness.  It denotes very much the same area as that in the 2010 SPD and proposes very much the same treatment, namely, drive high-rise down St Thomas St and into Bermondsey St and the conservation area.  Now they know they are being watched the planners take more care with their presentation and the high-rise sub-text is kept well out of the frame – only to be found buried in the draft ‘New Southwark Plan’ on the Council’s website only to be uncovered by determined investigation by anyone who reads the notice.  The forum needs to consider a response to this new affront for submission prior to the deadline of 28n April. 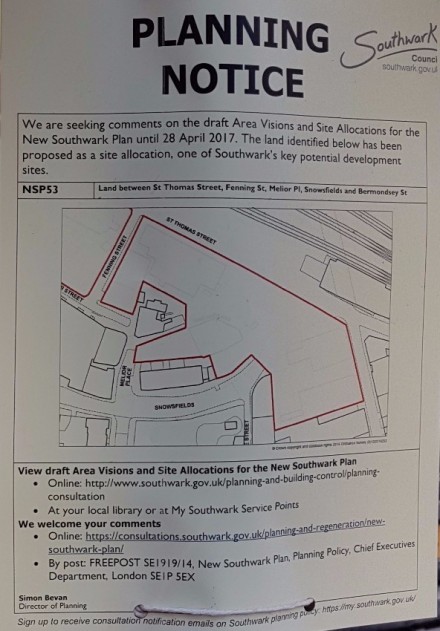 The planners represent a shining example of how far local governments can get away with secrecy and deception when they have no meaningful opposition, but even they could learn a lesson in arrogance and complacency from the ‘regeneration’ department.

The sell-off of the Beormund School site is naked asset-stripping dishonestly justified by facile statistical misrepresentation of the requirement for schools in our area.  So arrogant is this department that they can brazenly claim that we don’t need schools because, for the most part, we do them so badly that parents all send their children elsewhere.  So whoopee, we can close the schools and sell off the sites!

The first locals knew about this plan was when in a comic extravaganza for developers hosted by the Council’s private sector marketing rejects they hailed their ‘Oven-Ready’, ‘Quick-Win’ council sites for sale.  Since then, they have just brazened it out, refusing to justify the decision to sell off the site, or even say where the initiative came from.  Bizarre denials and evasion tactics in correspondence with the Cabinet member for Children and Schools, Victoria Mills, and the Director of Regeneration, Stephen Platts, will be reviewed at the meeting.  The latter is under pressure to attend a meeting with locals but is currently refusing to attend on the basis that we are too nasty. i.e. We have exposed his methods – spoiling his plan to pull it all off behind our backs.

Since our last meeting there have been notable events in respect of two of the developments under scrutiny:

The Ticino proposal was approved at the planning committee meeting of 21 March.  Representations from BVAG however put the committee members in an embarrassing position.  They are instructed to vote in line with the party whip (Hence the standard formal announcement at meetings that they are all in fact independent, free thinkers.)  The planners had concocted a completely untenable theory about the age of the building which, championed by principal poodle, Nick Dolzeal, the labour members had to pretend to believe, against all logic and evidence.  Similarly, they had to pretend to believe that the developers/planning officer hadn’t misrepresented the proposed basement of the building as not requiring ‘special foundations’.  As this is an undeniable technical fact, of which the planners were fully aware, there is some egg on faces and there is some anxiety that there may be a legal challenge based on the planners’ misrepresentations.  This is graphically demonstrated by the evasiveness of Simon Bevan, Head of Planning, in correspondence with BVAG – which will be reviewed at the meeting.  Meanwhile, as of the time of writing the Council website refers to the consent as ‘pending’.  As the approval was given almost a month ago presumably something is afoot.

The ‘Hatchers Mews’ proposal that massively increased the overshadowing and overlooking of Tanner St Park has been withdrawn.  We hope to find out why and whether it has been given the green light for a reincarnation – and share the information at the meeting